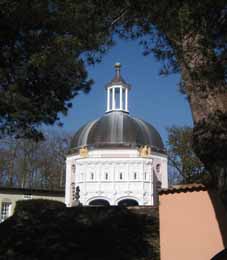 Have you ever wondered what the ideal circumstances might be for watching an episode of The Prisoner? It's impossible that we will ever be able to watch "Fall Out" alongside McGoohan himself but back in the 1970's, some of us were lucky enough to be a part of something almost as unique. It was the culmination of the very first fan convention on a typically drizzly Sunday afternoon. The date was 17th April, 1977...

There were no fancy dress homages in those days, no Max's shop, not even a noisy evening disco. The hippies in charge of the society back then would never have condoned such common vulgarity. ITC, it turned out, had brought down a 16mm black and white print of "Arrival" which was shown in the Hercules Hall. What made that screening unique was that in the crowded audience was non other than the creator of Portmeirion himself, Sir Clough Williams-Ellis. I must admit at this point that my own ignorance of Portmeirion's architectural history was degree absolute. Phil Kendrick, on the other hand, had been to the village before and knew something of its development.

So there Phil and I stood, next to the side door by the bar, chatting to the great man himself. He certainly looked the part of the eccentric genius with his legendary plus-fours, dapper waistcoat and buttonhole flower in his jacket. Sir Clough had quite clearly been intrigued by all this new activity. In '77 we did not take control of the place as we did in later years. He said he had enjoyed watching the episode on our medium-size screen and thought his "brain child looked impressive''. A fine tribute to McGoohan's efforts.

Sir Clough told us that McGoohan and he had become friends prior to filming and he felt he could therefore trust him enough to allow Paddy to shoot his magnum opus in the village. This trust, it appears, was not to prove misplaced. It was then that he mentioned to us for the first time, as far as Six of One was concerned anyway, what was to become known over the years as the 'original' Rover. Sir Clough said that it had failed to work and if memory had served him correctly how it had sunk in the sea. His comments about this surprised us both as information on the production, even in Six of One, was virtually nil in 1977.We later mentioned what Sir Clough had told us to others and several people wondered whether this was a very old man's failing memory but I can tell you for nothing that Sir Clough's mind was sharper than anyone else's in the village that day. He also said how the young people (well this was 25 years ago) in attendance had pleased him as he liked to see "all that colour and life" wandering around his creation.

Thanks to Steven Ricks' video, many of us have now had the chance to see the go-kart Rover although its ultimate fate is still uncertain.

Since Sir Clough Williams-Ellis' death in 1978, the village has become more commercially successful. It is debatable whether in the interim it has lost a part of its original dignity and some could well say its survival depends upon an economic compromise of Sir Clough's 1920's ideals.

(Adapted and edited from a feature by Vaughan Brunt, with his kind permission, from CAMERA OBSCURA No.15) 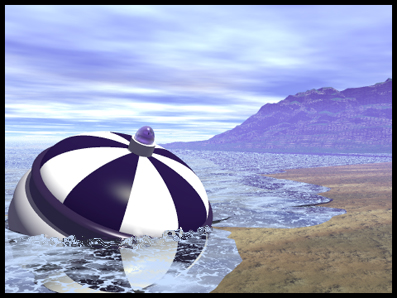 CLICK HERE TO RETURN TO THE MAIN UNMUTUAL NEWS PAGE