Rick Davy attends his first Walkabout in 12 years and finds that whilst some things have changed, much hasn't.

**Please note that due to not being willing to provide Six of One with a ready-made walkabout route, the events and sites mentioned here are not shown in the order actually visited.**

April 25th 2004. One of the hottest days of the year so far, and I find myself on an Underground Train heading for Marble Arch. The reason? The latest of Dave Lally's long running guided tours of the London locations used in The Prisoner is taking place today. The last one I attended was in 1992 and I was aware that some of the locations (Stag Place, World Cameras and those famous double doors to name but three) no longer existed so was worried that there might not be much left to see. I couldn't have been more wrong! 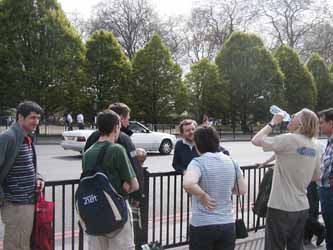 After meeting up with Nigel in Bond Street (we were looking for a Virgin but there doesn't seem to be one there any more) and a quick drink in The Carpenter's Arms we headed for the meeting place. We appeared to be the only Prisoner fans there so were worried that no-one else would be turning up. Wrong again!

Within 10 minutes a large crowd had gathered. Some new faces, some old, some Londoners, and some from as far afield as Essex, Berkshire, Surrey and even Scotland! Fortunately, there were no Shrewsbury-based coordinators present, as had been muted, so Dave's specially made "You Are Not Welcome" banners were not needed. Dave introduced all the new faces to the old and began his tour.

It must be said that the years have not dampened Dave's enthusiasm for the event. He must have organised around 40 walkabouts over the years but has somehow managed to keep his patter both entertaining and informative. With a mix of newbies and old hands, it might have been difficult to keep everyone interested but this wasn't the case. Dave had everyone enthralled from start to finish (although it must be said that due to his fast walking speed there were moments when he was talking to himself).

Within 10 minutes, we'd managed to cover locations featured in both Arrival and Many Happy Returns and despite Marble Arch being covered up I'd forgotten how exciting it can be to see at first hand some of the Prisoner locations.

MANY HAPPY RETURNS LOCATIONS AS THEY ARE TODAY

With many of the Prisoner locations being a fair distance from each other one might also think that the walking between sites might become boring. This couldn't be further from the truth. Dave's knowledge of London is almost second to none, being able to rattle off stories and information regarding almost every building passed. Even if you had never seen The Prisoner this would be a most interesting tour! There are several sites of interest to Prisoner fans such as the original ATV/ITC offices, the Channel 4 building, and the ICA building (the traditional "toilet stop" of the walkabout) as well as a plethora of Royal and Governmental buildings en-route.

Although many of the locations can't be visited in the order shown in the series, the highlight of every walkabout is the ability to almost reconstruct the entire opening titles to the series. With the double doors being replaced by a single door some years ago it was a true feat that Dave is still able to find the exact resignation corridor used in the series, particularly when you bear in mind the maze of similar corridors which lie beneath that part of London. 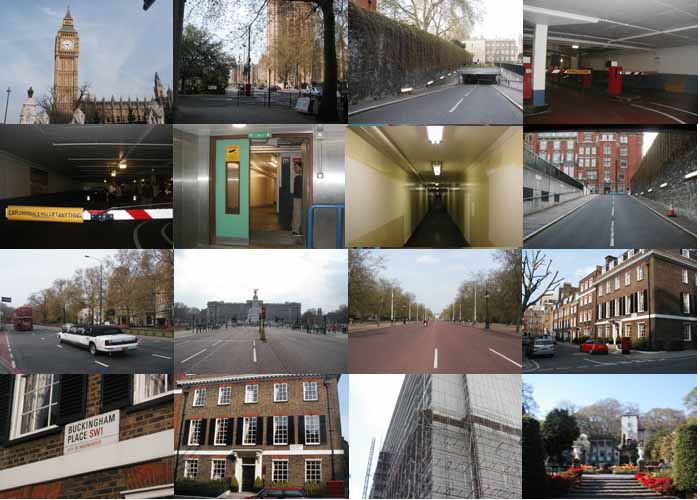 THE PRISONER OPENING TITLES AS THEY WOULD BE TODAY

One episode which (towards the end anyway) also features many London locations is Fall Out, and each of these was visited too. The post box seen in the policeman scene has unfortunately been removed (although the circular mark upon which it once stood can still be seen). 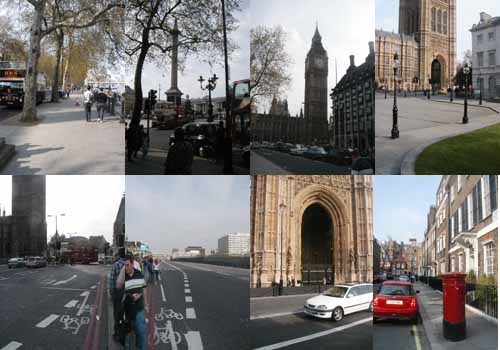 FALL OUT LOCATIONS AS THEY ARE TODAY 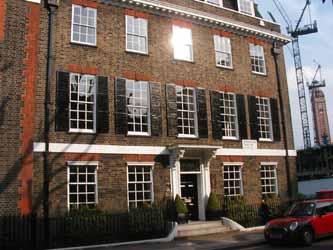 After another walk in the almost sweltering heat, stopping off at what was once a staple of walkabouts (the former "Christmas Shop"), around 3 hours and 3.5 miles after we met up, the tired but happy band of attendees finished the tour at The Prisoner's London home in Buckingham Place, which hardly seems to have changed since the series was filmed.

Stag Place, as seen in Many Happy Returns has sadly been rebuilt and the flats opposite, Number Six's last view of London before his abduction, are currently undergoing refurbishment. This did little to diminish the enjoyment felt by everyone who had come along and we all made our way to Pizza Hut for the traditional post-walk meal (John and Clem managing to get an extra free Hawaiian!!).

All in all I would highly recommend the walkabout as both a highly informative and most enjoyable way to spend an afternoon. I will definitely not be waiting another 12 years before my next one. Dave (ably assisted by his prompters Nigel and Mark) has an infectious nature and coupled with his knowledge of both London and The Prisoner (and other shows, pointing out locations from series such as "No Hiding Place" throughout the day) there is no room for boredom. Get yourself along to the next one - I know I will!

All the locations featured in the series can be found in our Locations Guide.