The Unmutual Website
A History of 'Map of Your Village'.
By David Stimpson,
with thanks to Rick Davy and Anthony Rooney.

The Map of Your Village, whether colour or black and white, or even a larger map, doesn’t actually tell you anything. Because in The Village
no-one is supposed to know anything! 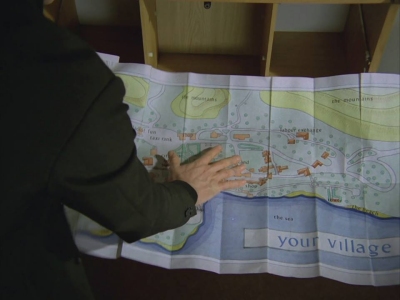 Over the years numerous Maps of Your Village have been produced.

The one below dates from 1980, produced by a regional fan group. Although there is a slight artistic license about the map that does not appear on the originals produced for the series. Such as the Radar Zone, 3 mile visual surveillance limit, No.6’s Gym concealed in the woods, the electronic eye statue columns, along with the graveyard {which is in the wrong place on the map anyway}, the Recreation Hall, the Rover Cell concealed at the bottom of the sea, and the lighthouse. One inaccuracy with the map, is the Control Room being situated under the Green Dome, when it should be under The Town Hall. 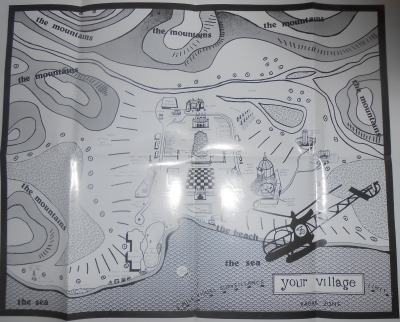 An exact reproduction of the black and white map was produced in the mid 1980’s by Steven Ricks {TR7 Productions}. On the reverse side is an ordinance survey map of Portmeirion and the surrounding peninsula. In 1988 Steven then produced the map below. It contains more noted detail than the maps in the series, but keeps more to the original, with the graveyard on the beach below the cliffs and lighthouse. Steven added the hospital to his map, where it doesn’t appear on the original Map of Your Village. 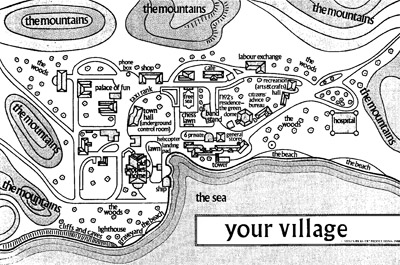 He also produced a much larger map but why the omission of the hospital is something of a strange oversight on the part of the calligrapher. 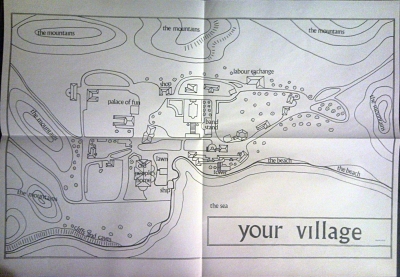 In 1992 Steven then produced the first replica colour Map of Your Village. 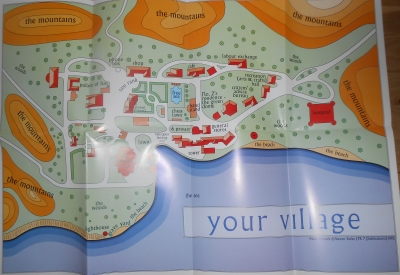 The below map is a watercolour Map of Your Village produced in 2000 by Roger Langley. Why produced in watercolour is unknown, but it is not an exact replica of Your Village Map, as it doesn’t show the hospital. One would have hoped for a much larger map, and less of the descriptive text! As the creator of the map goes to great pains to describe when and where we see the Village map in the series, as if we didn’t already know. He also goes into great detail describing how this replica map was created, as if that hardly matters! A real case of the calligrapher blowing his own trumpet! 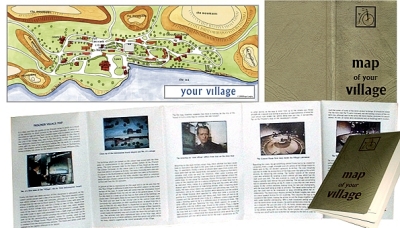 An interesting map in 2001 appeared in the Robert Fairclough book 'The Prisoner - The Official Companion to the TV series'. Whilst not screen accurate, it is well designed. 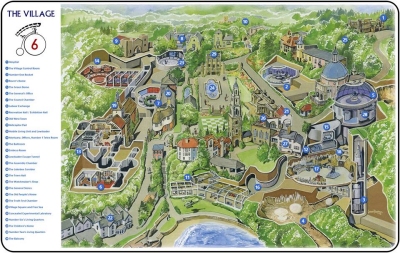 Below is a full-size colour replica Map of Your Village, with leather effect cover. This map came as part of the DeAgostini 'The Prisoner - The Official Fact Files' part-work in 2004 (details HERE). And in my opinion is the best replica of its kind. 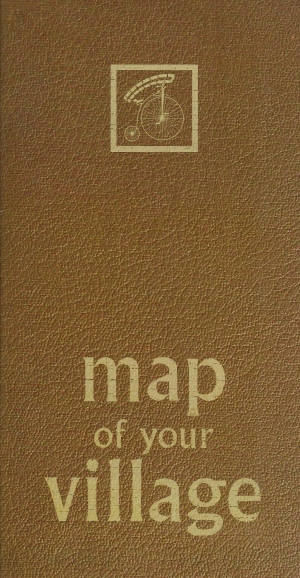 In 2012, Portmeirion began producing its own colour map, following on from the success of Festival Number 6, and this is shown below.