By Rick Davy, with thanks to Steven Ricks for his invaluable help. Images (c) Rick Davy unless otherwise stated.

Sadly, with the destruction of MGM Studios shortly after The Prisoner was completed, many of the props, costumes, and production documents used during the making of the series were destroyed. But some items, thanks to quick thinking by cast and crew, and fans, survived!

This page covers the props and costumes which still survive from The Prisoner, and also the items seen on screen which were mass-manufactured and can be purchased via auction sites and vintage shops.

There are several costumes from the series which still survive today. The first is the jacket worn by Patrick McGoohan in the episode Living in Harmony, which was owned by series producer David Tombin and then used in the episode (photos exist of him wearing it during the shoot for Dance of the Dead) and given to Steven Ricks by David in the early 1990s.

Also owned by Steven is the upper part of Denise Buckley's costume from the episode Dance of the Dead (the Elizabeth I costume worn during the trial sequences at the end of the episode), which Steven purchased from costumiers Berman's in 1991 (the sale was agreed due to there being no skirt surviving).

Both costumes are pictured here on display at the Fifty Years of The Prisoner event at Elstree Studios along with an original Villager cloak from the series, also owned by Steven. 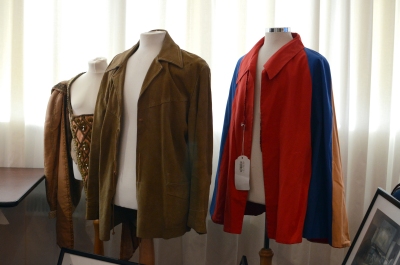 Several other cloaks are also known to have survived, one worn by Sheila Allen in A. B. and C. matches the colour scheme of a cloak now owned by The Prop Store (details HERE), and another, previously won by fan David Hegarty in a competition, is now displayed in Portmeirion's Hercules Hall having been donated by David (details HERE). 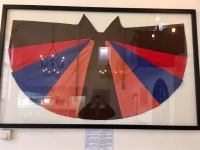 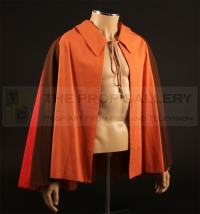 In terms of the blazers and other outfits worn by Patrick McGoohan in the series, several were known to survive (kept by McGoohan's personal assistant, Jimmy Millar); including several blazers. These were given to fan Peter Jones... 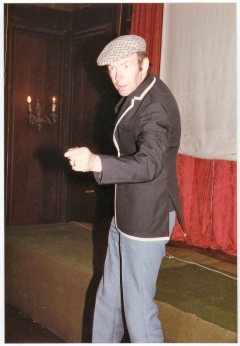 ... (more photos of Peter wearing the brown piped jacket can be seen HERE) who then donated them to an organisation, but sadly one member within that organisation took personal ownership and sold them at auction at Bonham's, resulting allegedly in the brown blazer being purchased by a trading card company and ultimately destroyed. The whereabouts of the white blazer, also purchased at the auction, is unknown. The blazer on display at Portmeirion is not a blazer used in the making of the series (click HERE for more on this). 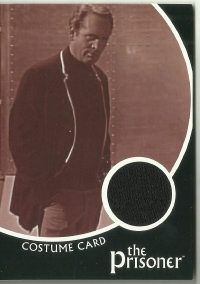 Peter Jones also owned the overcoat used in A. B. and C. which is now in private hands, and the black suit worn by McGoohan in Fall Out, whereabouts unknown, which both formed part of the above-mentioned Bonham's sale of items.

Villager badges are fairly common, having been kept by some members of the cast and also extras who were involved in filming in Portmeirion, including Dance of the Dead guest star Norma West below (photo from Nadine Coffey taken at the Fall In 50th anniversary event ), who still owns her original Number 240 badge. 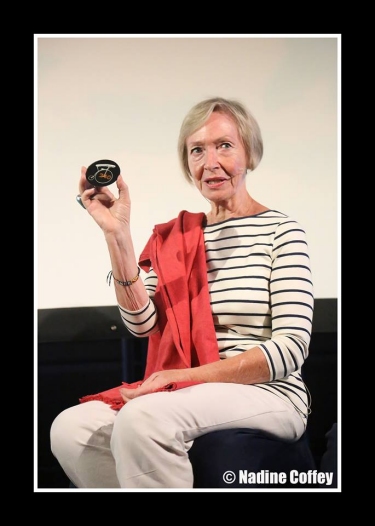 Other known surviving badges include 111, worn by extra Leri Roberts in Free for All, and 31 which was retained by another series extra, now owned by Steven Ricks. 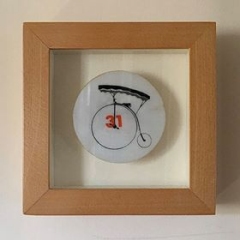 Another familiar costume item is the wooden slit-eyed glasses worn in several episodes (most notably by Leo McKern in the episode Once Upon a Time). One was kept by Moke driver and extra Cynthia Jones, now owned by David Jones.

Other aspects of costumes which were known to have survived, but the wherabouts is currently unknown, include Peter Wyngarde's deck shoes from Checkmate (which the actor kept for tennis), and Anton Rodgers' shooting stick from Schizoid Man which the actor also claimed he kept. As both actors are now deceased, it seems unlikely that these items still exist.

Several props from the series have also survived in addition to the above costume items.

The most notable of these is probably the Butler's trolley seen in several episodes, owned by Steven Ricks. 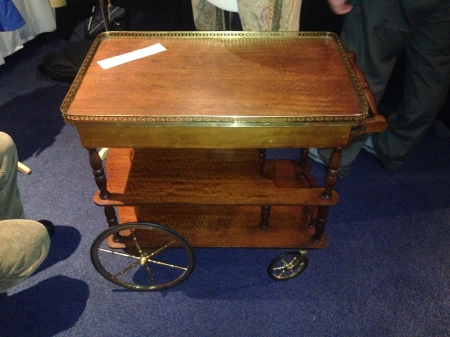 Also owned by Steven is an original Tally Ho newspaper, seen in Free for All .

Owned by Rick Davy, the following cards can be seen in the episode A Change of Mind (shown on screen to Villagers in the hospital, along with Rover footage, to try and 'cure' their 'unmutuality'). 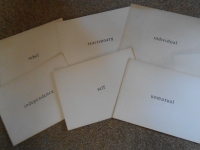 Pottery seen in the series was kept by art director Jack Shampan, and several pieces are now in private hands, including the coffee pot seen in Number Six's cottage throughout the episode, owned by Steven Ricks, and a collection of plates and other items of 'Favourite Horsemen' (the pattern seen in most episodes) in private hands of several individuals, including this small pot. 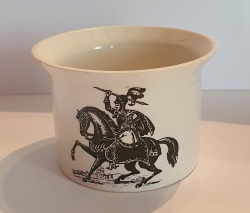 Several other items were kept by Jack, including two white wall mounted items (below) now owned by Steven Ricks, a desk, and a fire grate (whereabouts unknown). 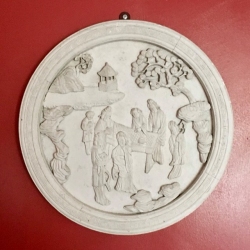 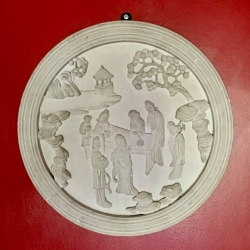 These two wall mounts can be seen in the hallway of Number Six's house in Many Happy Returns.

Painted versions of the same mould can be seen in Number Six's lounge in Dance of the Dead. 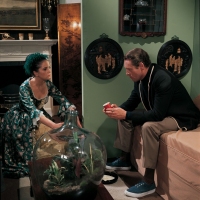 Portmeirion of course could be seen as one massive prop in itself, and several items seen on screen at the locale are no longer in situ but in the hands of private collectors, including original litter bins seen in several episodes. Pieces of the stagecoach seen in the series within Portmeirion, which was sadly removed due to becoming unrepairable, were purchased by Canadian collectors taking part in a TV series.

There are several items seen on screen which are real items, mass produced at the time, which collectors can easily find online and elsewhere. Please note the following are not original props but mass-produced items.

The Lava Lamps seen in the series were produced by Crestworth Limited, which still exists today under the brand name Mathmos. 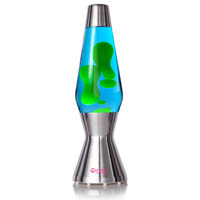 The giant Globe chair in which Number Two sites, was produced by Eero Aarnio, and are still produced by the company today. The chair seen on screen was on loan from the company that made them to the production - so they passed it to the plaster shop who took a casting off it and made their own (so they didn't have to pay ongoing rental on it). The company were not best pleased at this! 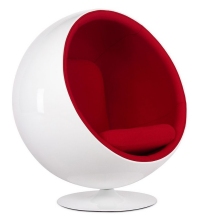 Whilst the large red phone seen in some episodes used by Number Two was a wooden prop, the smaller phones were real intercom devices produced by National Interphone...originally a corded intercom phone.

The camera Number Six uses to take photographs in Many Happy Returns is a Canon Dial 35mm camera. 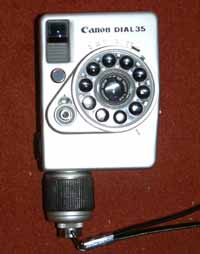 The transistor radio which Number Six finds on the dead body on the beach in Dance of the Dead is a JulietteSuper 7 Transistor Radio. 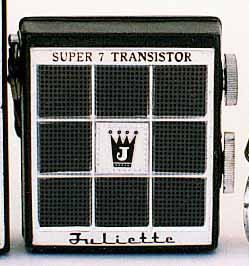 The tape recorder Number Six finds on the beach inthe episode The General is a Sanyo Channel Mixer.

In the episode The Girl Who Was Death Number Six is seen reading a storybook to some children. This is The Odham's Encyclopedia for Children which the art department redressed for the episode. The colour drawings seen do not form part of the book, but the 'The Village' drawing does, with the addition of a tower by the art department, to match the Witchwood village seen on screen. 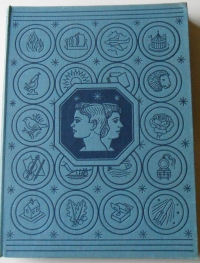 Number Six is seen wearing various watches in the series. The 'Electropass' watch seen in Arrival is a Hamilton Supercompressor. 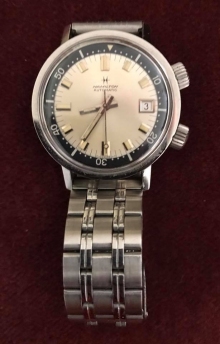 In A Change of Mind Number Six is seen wearing a Tussot watch. 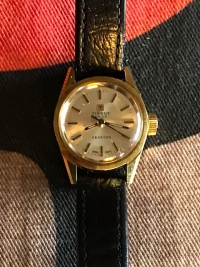 Other items: The coffee percolator seen in the same episode is a Russell Hobbs CP1. The record player seen in Hammer into Anvil is a A Garrard AT6 turntable.

The Unmutual Website has a special section concerning all the vehicles seen in the series HERE, but it's worth mentioning that pieces of one of the original Mini Mokes in the series, owned by Phil Caunt, can be purchased as a special display piece seen below (details HERE). 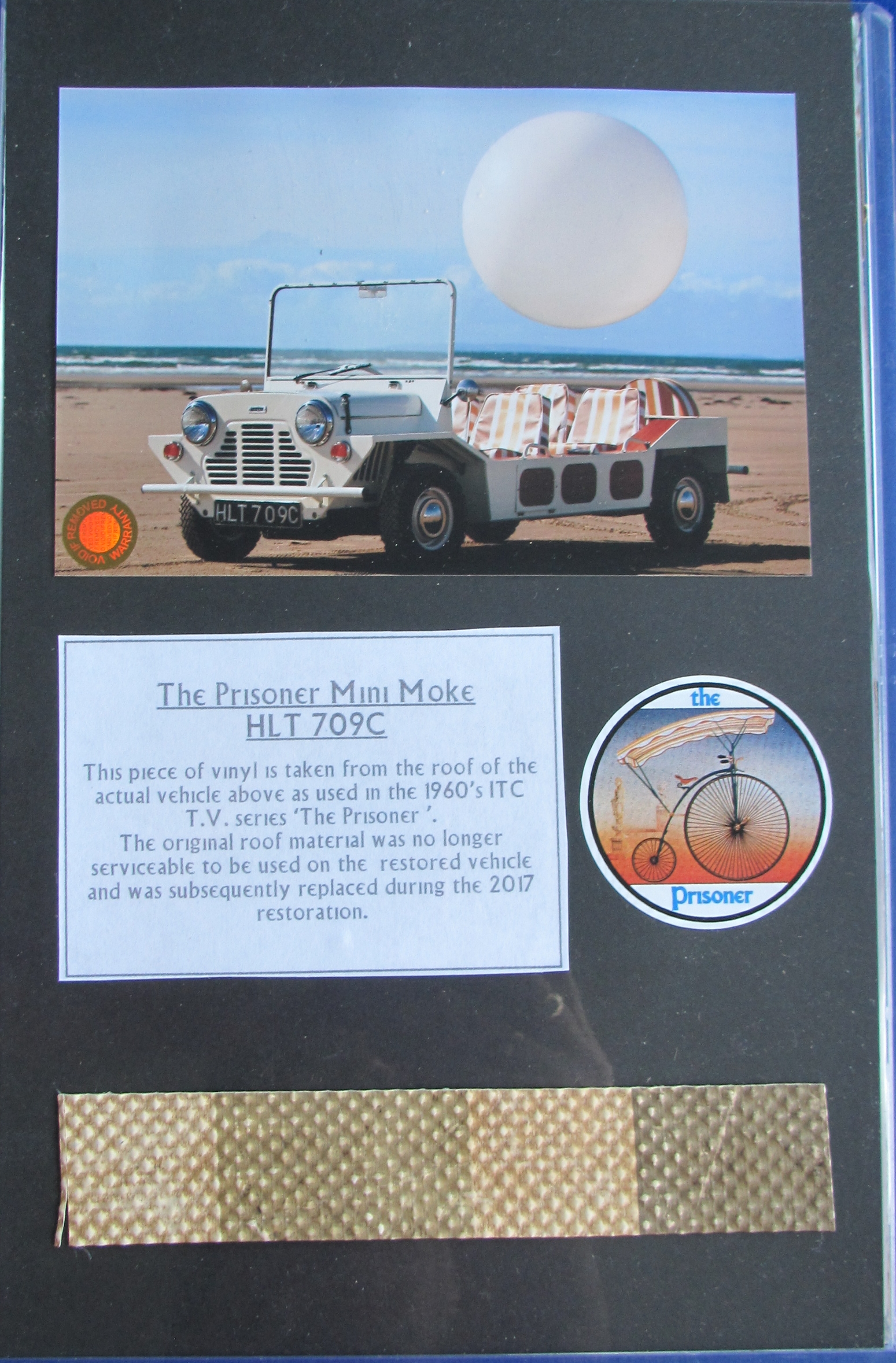