The Unmutual Reviews 2003 - A Vintage Year Review by Lew Stringer

Hard to believe, but 2003 probably kept fans of The Prisoner more occupied than any other year. Quite surprising for a series that's 36 years old and only ran for 17 episodes. A variety of publications and events, all independent of each other, meant that treats were in store from all directions! 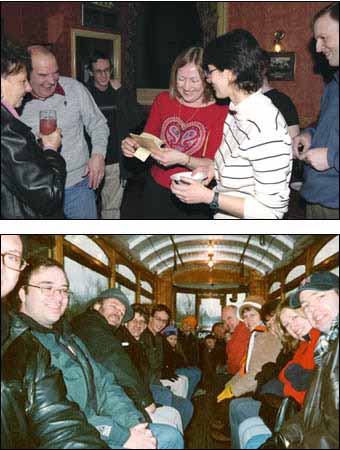 The year kicked off to a good start with the first ever "Unmutual Party" on Saturday January 11th. This evening event was held in the Old Contemptibles pub in the centre of Birmingham. The idea being to serve as an informal social get-together for all Prisoner aficionados and friends who rarely saw each other since the demise of Six of One's popular "Work Ins". The event was a big hit with all who attended and the packed room was full of laughter and a great atmosphere. Hosted by the ever-entertaining Dave Jones, the occasion included a lighthearted quiz, a buffet, and, thanks to the kind permission of Yorkshire Television, a screening of "The File on Harry Jordan". (The 1978 version of the screenplay by Prisoner writer Anthony Skene with some interesting similarities to The Prisoner, not least being the inclusion of a dwarf butler!).

For those able to stay over in Birmingham, the weekend didn't end there. The next day, a group set out for a day at the Black Country Museum.

A special photo report on the party can be found HERE.

February saw the publication of the 22nd issue of "The Morning After". Although primarily a magazine devoted to The Persuaders, (also a favourite series of many Prisoner fans) the issue contained an exclusive interview with Peter Bowles (who appeared in the Prisoner episode "A,B & C"). Copies of the magazine can be ordered from http://www.itc-classics.com

March 19th was the 75th birthday of Patrick McGoohan. Several weeks prior to this, on the alt.tv.prisoner newsgroup, Roger Goodman of priz.biz had asked Prisoner fans to contribute to a special tribute for the actor. Roger, assisted by Jill Mills of the Chat and Mouse ICQ site, then compiled the tributes to send to Patrick on his birthday. The tributes are now online at http://www.75.supanet.com

No less than four Prisoner-related books hit the shelves in 2003. The first was a hardback from Titan Books, entitled "The Prisoner: The Village Files" by Tim Palgutt. A lighthearted look at the world of the Village using design illustrations, it met with mixed reviews, but perhaps some took it too seriously. See the Reviews page for more information. 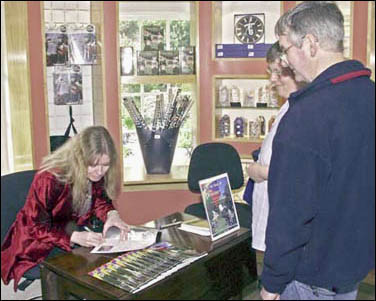 The second of 2003's Prisoner books had its official launch on Tuesday May 6th in the Prisoner Shop, Portmeirion, when native New Yorker Catherine Nemeth Frumerman arrived for a signing of "On The Trail of The Prisoner: A Walking Guide to Portmeirion's Prisoner Sites". Accompanied by her husband Bruce Frumerman, whose photographs illustrate the book, and publisher Roger Goodman, the launch was a winner. Cathy also received publicity in the local press and was interviewed on BBCWales radio. Click here to read a review of the book.

June saw the publication of a book entitled "Reading Between Designs: Visual Imagery and the Generation of Meaning in The Avengers, The Prisoner, and Doctor Who". Clearly a cerebral read and not a bathroom browse, it was published by the University of Texas and written by Piers D. Britton and Simon J. Barker. The 300 page book was described on its website (www.utexas.edu/utpress/books/brirea.html) as discussing "such topics as the sartorial image of Steed in The Avengers, the juxtaposition of picturesque and fascistic architecture in The Prisoner, and the evolution of the high-tech interior of Doctor Who's TARDIS". Blimey! That's enough to make any Priz-fan want to party, and luckily one was just about to happen...

July 19th was "Prisoner Day 2003"! The Old Contemptibles in Birmingham once again served as the venue for another social gathering. However, this one was a longer event, from 2.00pm to 11.00pm, and included three guests! Fans arrived from far and wide to see Dave Jones interview Tony Sloman, Robert Fairclough, and Jaz Wiseman, plus a screening of "The Chimes of Big Ben", a fun quiz, a raffle, and a buffet. For a full report, click HERE.

Saturday August 30th saw another book signing in Portmeirion as the demonstrative David Stimpson launched his self-published venture "The Prisoner: Variations" at an all-day appearance in The Prisoner Shop. On the same day, around 30 Prisoner fans were coincidentally starting their annual week's holiday in the village, so David was guaranteed lots of interest in his book. A good start to the "Non-Con" holiday!

The Official Prisoner Calendar for 2004 was also launched in August. Expertly designed by Rob Fairclough for Slow Dazzle Ltd, the publication featured a fine array of large crisp images from both The Prisoner and, for the first time included Danger Man too. See the Reviews page for a full report on this nice collectible.

Add to this list the London Prisoner location "Walkabouts" run by Dave Lally, the Seminar in the South of England which included topics of The Prisoner, three issues of The Unmutual newsletter, local group meetings, various websites, and a couple of things by a fan club, and it was a vintage year for Prisoner Fans!

My apologies if I've forgotten to mention any event or item. If so, please contact us and we'll be happy to add the details to the above.