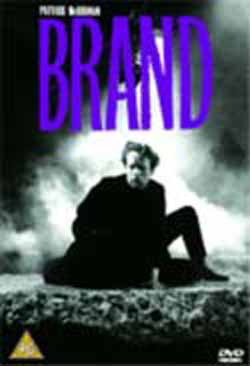 "Brand", by the Norwegian Henrik Ibsen, was the breakthrough work that made Patrick McGoohan's name as an actor of force and stature, and the 1959 BBC World Theatre version of it has been released on DVD through the Network label. It cost me just under GBP20, though you may be able to buy it cheaper. Having been one of those who campaigned for its release, you might have thought I'd have bought it before now. Still, never mind.

As presented, the BBC's version is pretty much just the stage version by the 59 Theatre Company, Hammersmith, that has been filmed.That needs to be taken into account when watching it.

The set is sparse and bleak (and shot in black and white) and the style of acting throughout is very theatrical, in that it's never less than "big" as compared with TV/film acting and it frequently looks "over the top", especially in PMG's performance as the obsessed travelling priest who comes scrabbling over the mountains to lead people to his idea of God.

"My God is a storm," he says to an old school friend he meets walking on the mountain,"where yours is a gentle wind." Brand sees himself as the bearer of the One True Vision of faith (hmm, that sounds familiar, even today) and soft he isn't, whatever the cost to himself and those around him.

Brand's charismatic determination and resolve appeals to the people in the village where he grew up and they ask him to be their priest. The centre piece of this play is all the consequences of their decision and Brand's own tortured story played over it.

The biggest expense appears to be the dry ice budget and it billows around in fine style. I was involved in a revival of this version of the play in Cambridge about twenty years ago and it was a virtual carbon copy of the BBC's.

The then-director of "Brand" was a real Ibsen nut. He used to take a pride in submitting what we came to generically call "Ibsen budgets" to the production company I was with at the time as follows:
Set requirement; one chair, plain wood - black.
Backdrop (ie, rear wall covering) requirement; one - black.
Costume requirement; both sexes to be formal - black.
Props requirement; one heavy leather-bound ledger - black, one pen - black, one inkwell - black.
Lighting requirement; minimal, one spot (fixed) on DC (that's "down centre" - ie a pool of light on the front of the stage - for those not familiar with stage terms).

Get the drift? Well, this version of the play's very much like that too. Never did a mountain top sound more like a set built in wood and draped with material (except when we did it!)

To those who say PMG can only do obsessed/driven/OTT roles I'd say, "how could he do any less with this role in the way it has been set and directed?" It is the stage version and it's acted to reach the back of the imaginary auditorium. Only a couple of years later, PMG was doing regular film and TV work and acting a lot "smaller" than this.

To his eternal credit, Pat does do the full sweep of emotions (albeit large) as Brand and not for one moment does he let up, even when in the depths of despair. He is in the part with all his body and soul, and every twitch and every nuance is frighteningly, incontrovertibly, right.

It is really only the insightful character of Peter Sallis' Village Doctor, and again even stronger later in the play in Sallis' second role as the Provost, that Brand receives any substantial challenge and receives reason for any real pause for self-doubt. "Each generation must make *its* pact with God anew," says the Doctor, trying to point out to Brand that preaching hellfire and damnation was, perhaps, a message only appropriate to an earlier age. As the Provost, Sallis seeks to turn Brand's self-proclaimed divine purpose to the state's use - keeping the population subservient through their devotional faith. Oh, surely that could never happen<rhet>?

I've never seen Peter Sallis play these sort of "quiet strength" characters before and I am bound to think he would have made a formidable Number Two in The Prisoner, understanding Number Six's point of view and yet playing the subversive persuader on behalf of The Modern View and the Power Of The State. Apparently, he really did used to wind up PMG something rotten in the stage version of "Brand" by making a bit of a meal of his entry line. Who'd have thought it?

As I speak only a few words of Norwegian and those are only enough to say, "hello, how are you?" and, "where are the Gentlemen's toilets, Please?" I can't comment on the original text as compared with Michael Meyer's translation, but he says in an interview (one of the many valuable "extras" that come with the DVD) that basically he has taken out all the contemporary political and social satire in his version and just pared the play down to the main plot.

Well, there's still plenty of satire left in for my taste - in fact the script as performed is loaded with it.

I mentioned the DVD "extras" earlier. I'm pleased to say there are plenty of them with this release and it'll do you no harm to go through them *after* watching the play. Some spoilers are included, you see, and the play is best watched unprepared.

It runs about 90 minutes, but unless you have the attention span of a goldfish it'll just whizz by.

This is one Hell of a play, and a must for Prisoner enthusiasts. By the way, it ends with a clap of thunder...