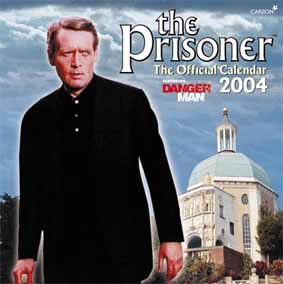 Back when I was a kid in the sixties, calendars were rather dull things giving one the basic yearly information and nothing else. Those that had illustrations usually featured paintings of thatched cottages or kittens. Basically, the kind of item you'd find interesting if you wore cardigans, read The People's Friend, and thought dominoes was an extreme sport. Unless you bought the Pirelli calendars of course, which were something else entirely and were bought by pasty faced under managers with comb-overs or car mechanics called Wayne.

Thankfully, calendars have evolved a bit since then. These days practically every cult tv series has a calendar devoted to it. Most of such items are published by Slow Dazzle Worldwide, as is the one reviewed here.

The Prisoner: The Official Calendar 2004 has been written and designed by Robert Fairclough, (author of Carlton's official book on The Prisoner). When I say "written", I'm referring to the numerous snippets of Prisoner info given on the relevant dates, not suggesting that Rob has invented new months or decided to reimagine February. For example, March 18th 1967 was the day studio filming began on "Hammer Into Anvil", and September 11th 1960 was the day the Danger Man episode "View From The Villa" was first shown in the UK.

Yes, Danger Man is included too, over two spreads, which is a welcome bonus to the calendar this year. The format of the calendar is similar to most of Slow Dazzle's other output: the publication opens into a double page spread two feet high, with a huge 12" x 12" full colour photograph filling the top half, with the month below accompanied by smaller shots of the series, production paintings, merchandise, original book and comic covers, stills, etc in the other half. Jack Shampan's original painting for the 'Living In Harmony' town is shown beneath January, and the reproduction, like all the images here, is first rate. There are some nice surprises too; the large shot of McGoohan and the crew filming in London for the end of 'Fall Out' was new to me. At the foot of each Prisoner spread is a photograph of Portmeirion by Bruce Frumerman (who shot most of the images for his wife Cathy's book, reviewed HERE).

Calendars are no longer perfunctory items to be thrown away when the year is complete. They are now collectibles in their own right, and this year's Prisoner calendar is one of the best in its field. Rob has also designed the ones for Dalekmania (also by Slow Dazzle) and CSI: Crime Scene Investigation which are equally as fascinating. Click HERE to visit the Slow Dazzle Worldwide site where you can order the items and view an interior spread.