Click HERE for another review of this book by Anthony Rooney 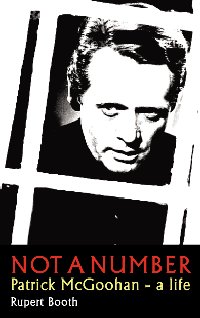 A few years ago, an attempt was made at writing a biography of Patrick McGoohan, but sadly what was churned out by "fan" Roger Langley (review HERE) was some of the most poorly written and compiled information ever to be associated with McGoohan. It was with trepidation that I learnt that another biography was being written, but mixed with relief that a professional writer, Rupert Booth, would be tackling the task of writing a biography of the great man. I was nervous for him if truth be told, was he on a hiding to nothing taking on this task?

Phew! What an improvement it turned out to be. A genuinely good read and the author must be congratulated.

The plus points are many. Booth has a very warm writing style, and in telling a personal story of Patrick McGoohan and his devotion to wife Joan, sprinkled with film/TV along the way, he has approached the subject matter in a more attractive way than a simple "screenography" approach. As a result we do get a view on what sort of MAN he was rather than just what sort of ACTOR he was.

Whilst there is still a lot of supposition on his part, unlike Langley he has actually done some original research with people who actually knew McGoohan. Whilst the previous biographer relied on heavy supposition from other fans, Booth has taken the time to interview those closest to him, including McGoohan's close friend and colleague Larry Green, editor and colleague Eric Mival (who has since commented that Booth did a very good job), and Director Alvin Rakoff.

Minus points are that there are a few innaccuracies (I can find no evidence of McGoohan having appeared at Stratford after appearing in "Brand" or that he spent 6 days in jail, for example), a few print errors with some of the interior photos being stretched, and I really don't like the cover (biographies should have covers which show the person, not a character he played) but i'm being picky with these.

No biography of McGoohan can ever be perfect, as there's so little of the man himself in the public domain having famously shirked the "celebrity lifestyle" of so many of his peers, but Booth has definitely managed to get inside the man. Many people have tried to reach a conclusion about the sort of person that Patrick McGoohan really was. For the first time, Rupert Booth may well have found the answer. Bravo!

Use the Amazon link below to purchase the book, with 5% of your purchase donated to TUW's event fund for charity AT NO COST TO YOU!