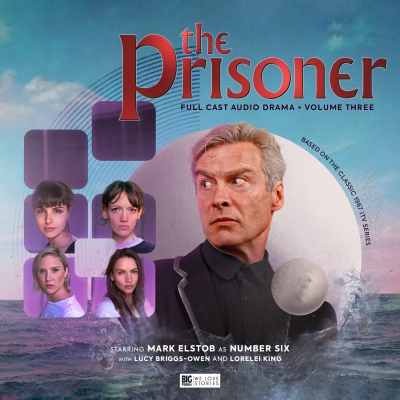 As psychologically intense as the original, and with dialogue which snickers with wit, this series is a crisp and sophisticated gem, bristling with suspense.

A triumph of nerve-tingling tension and storytelling.

Big Finish's Series 3 of The Prisoner is the zenith of its output.

An earnestly ambitious collection, with twists within twists delivered at breakneck speed.

A fresh and gorgeous testament to The Prisoner TV series.

A particularly lively and captivating ride of thrill and machination.

Introduction:
Series 3 of Big Finish's (more details HERE) The Prisoner audio drama series has finally landed, and these beautiful final episodes have been a very long time coming ! Again starring Mark Elstob as Number Six, the set can be ordered HERE. Whilst based on the 1967 TV series, it's imperative to not compare the two, as they are very different creations. Think of this not as a re-make, but as a re-imagining for audio, with a different Number Six entwined in the same struggle as the original. The first series was met with almost universal praise, and the second series was also well received (click HERE for my thoughts about those series).

Review:
After the success of the previous two series it was with much anticipation, yet also a little nervousness, that I received the four episodes which comprise series 3 of Big Finish's The Prisoner . I am pleased to say that I had nothing to be nervous about.

In terms of audio drama, there are few greater visionary talents in the medium than writer, director, and executive producer Nicholas Briggs, and he has delivered his strongest set of episodes yet. Big Finish's Series 3 of The Prisoner is the zenith of its output, a triumph of nerve-tingling tension and storytelling with some truly frightening and foretelling moments which rank at the very top of the franchise's peak.

Rather than four standalone episodes, series 3 is a cleverly constructed continuous story arc. What we are essentially treated to is a four hour Prisoner movie, which strengthens and builds in drama and intrigue as it continues. Using The Seltzman Connection (a loose re-imagining of Do Not Forsake Me Oh My Darling) as the core element, which not only links the episodes in this series, but also key elements from the previous set, it's an earnestly ambitious collection, with twists within twists delivered at breakneck speed.

The series begins with Free for All and Briggs's intense yet dreamlike version of the episode is a triumph. One of the key tenets of the original series is that it held a mirror up to the wider world, and this re-imagining is no different. Be it fake news, gun control, covert surveillance, and all manner of issues, all these aspects are included. As I write this, we find ourselves in a UK general election campaign which is becoming the most unpleasant, and underhand, in recent history. The themes of the episode as written in 1966 (inspired by the general election of March of that year), which Briggs has wonderfully re-imagined for 2019, are never more relevant.

But this isn't a re-make, or any sort of rip-off of the original. It's a fresh and gorgeous testament to The Prisoner TV series. As psychologically intense as the original, and with dialogue which snickers with wit, this series is a crisp and sophisticated gem, bristling with suspense.

What Briggs also does brilliantly is to expand great ideas from the original which had much more mileage than could be realised originally. Not hampered by the medium of television, he expands them further. Episode two, The Girl Who Was Death , is a prime example, as the writer takes the idea of a macabre assassin into realms which the original didn't, yet maybe should have, and ties it into the story arc wonderfully.

I won't spoil the final episode, No One Will Know or its ending for you, but suffice to say it will draw discussion in the same way that the original series did. It could not have ended in any other way. A conclusion, but one which is also left open, and for the listener to decide what's it all about?' As with the original, the viewer must get to work to solve the riddle. Just as it should be.

As for the performances, some are genuinely astonishing. Lucy Briggs Owen delivered an impressive performance as Kate Butterworth in Series 2, but raises the bar even higher here with a touching and heartfelt performance, with the hospital awakening scene in the second episode a particularly high point. What Lucy does is underplays the scene brilliantly, where a small crack in the voice can deliver much more emotion and drama than the shout-and-scream approach of other actors. In terms of another female lead, fairly new to Big Finish, Genevieve Gaunt also delivers a great performance and I am personally flummoxed as to how she is not a massive star and household name. Mark Elstob is back at his irascible best, but with a more calm and reflective nature which has added new layers to an already familiar character.

As with previous sets, there is a wealth of cast and crew interviews and behind-the-scenes content from the recording sessions, and a suite of music from the excellent composer Jamie Robertson.

The only downside is that, as with previous sets, I did (and this is possibly more down to me than the production) at times get confused with which character I was listening to, as some of the cast had similar voices and cadence. Add that to the fact that there was quite a bit of mind swapping going on, my addled brain nearly struggled to keep up. Other picky points are that whilst I love a humorous character and accent (I will champion Barnaby Edwards' Bandmaster and Shopkeeper until the cows come home, for instance), I'm not sure there needs to be quite the succession of Somerset-based farmers, stereotypical Germans (albeit ones based on the '67 vintage) and Blakey from On the Buses sound-a-likes in The Village or the Secret Service. But look, I could be very picky about elements of every episode of the original series if I wanted to as well, so don't let these very small things put you off of buying what is an excellent audio collection.

Overall, I can't praise Nick Briggs and his team enough for the Prisoner journey he has taken us on, and series 3 is a particularly lively and captivating ride of thrill and machination. As the bars clanged for a final time, I felt a tinge of sadness that this may be The Prisoner 's final incarceration.

I'd finally like to give a mention to Control and Danvers, brilliantly portrayed by Jim Barclay and Barnaby Edwards. A Fry and Laurie-esque laugh-a-minute double-act, I hope there is some possibility of a spin-off series, or perhaps a place in some other part of the Big Finish world for the two characters to continue to shine.

Should this be the end for Big Finish's The Prisoner ? Well, this particular audience is on his feet, clapping his hands, and shouting for more. I'd love to see another series, or perhaps some specials, in the future. Encore! Rick Davy, November 2019.