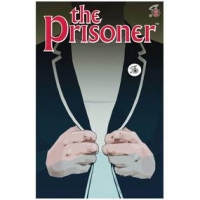 I have to confess that my least favourite episodes of The Prisoner were the ones set outside The Village. Other than those wonderful opening credits showing the Prisoner’s resignation and subsequent kidnapping from his London home, that was all I wanted to see of the ‘real world’ in that series. No pun intended but The Village captivated me with its architecture, its fashions, penny-farthing badges and even the font used on the signage (“Questions are a burden to others, questions a prison for oneself”).

So perhaps it is no surprise then that the first issue of Titan’s new Prisoner comic, which features very little of The Village within its pages, entirely failed to grab me.

Like DC Comics’ stab at a Prisoner comic back in the late 1980s, this latest effort has got itself far too hung up on the business of the hero being a spy. Although it was never actually stated in the TV series that the original Prisoner was a spy, it didn’t need to be as it was pretty darn obvious. Aside from being the MacGuffin needed to deliver Patrick McGoohan’s character to The Village in the first place, ‘Number Six’ used the skill set of a spy to his advantage in various episodes (though a physically fit scientist with lots of top-secret information in his noggin might have fit the bill just as well and, better still, put an end to the tedious ‘is he John Drake?’ debate). But essentially our hero was a nameless man of mystery, and it was his struggle against The Village that was important rather than his former occupation.

As with most modern comics, the story is narrated in angst-ridden fashion by its hero, MI5 agent Breen. If I describe Breen as a cross between Jason Bourne and Ethan Hunt, it is not to make him sound exciting but to point out what a clichéd character he is. I felt a very weary sense of deja-vu as Breen donned disguises and jumped on a plane to evade his former masters. The eventual use of a drugged pizza to capture Breen lacked the kind of style I associate with The Village. Mind you, The Village has reinvented itself as the Pink Panther now – stealing things and leaving a ‘V’ monogram behind as a calling card (as this is a comic perhaps they could call in Batman and Robin to investigate? Oh, wrong company. Pity, Number 1 would fit in well at Arkham Asylum). Oh, and Breen and MI5 already know about The Village. Only one agent ever escaped, apparently, and he was insane. Well, THAT takes care of Fall Out then. *Sigh*

I started off bored and ended up annoyed. Little things bugged me – for instance, after eating his drugged pizza why does Breen hallucinate an image of Leo McKern? (Why not Mary Morris, Derren Nesbitt or even Clifford Evans?) And shouldn’t Breen have woken up in a perfect replica of his Tuscany cottage rather than Patrick McGoohan’s old pad?

While the script left a lot to desire, the art too was only so-so, failing to come alive and achieve any kind of vibrancy even when we finally reach The Village (though, to be fair, that might be more the fault of the colourist working in subdued and muted tones).

I’ve never been a fan of the cynical variant cover ploy companies use to sell more ‘collectors’ item’ issues to comic book fans. The variant covers featuring McGoohan, are – at best - misleading, and I imagine some people will be very disappointed to find themselves reading about some new guy in a story that comes across more like a Mission: Impossible knock-off than The Prisoner. And that’s the thing with this comic - it makes the mistake of trying to be a sequel to a TV series that requires no sequel, and gives us a new hero when the original is one of the great iconic fictional characters of our time. Sorry, Titan, but if you slap that logo on the cover then, by rights, you really should be giving us the original, not the economy pack!

I am prepared to get behind anything that promotes Patrick McGoohan’s vision and takes The Prisoner forward into the future that awaits it once us ageing older fans are gone (see, or hear, rather, the wonderful Big Finish audio adaptations). Because of that I’ll give issue 2 of The Uncertainty Machine a try in the hope that things might improve but, after such a disappointing first issue, my expectations are pretty low.

Rating: Poor. Somewhere between the AMC reimagining and Hank Stine’s ‘A Day in the Life’ sort of bad.

As readers of The Unmutual will know, I am not a fan of re-imaginings or spin offs of the 'Prisoner' series. To be able to stand on their own two feet, they have to be something special, so it's always with optimism, yet worry, that new writings based on the series are released.

Titan comics (see news stories HERE) are the latest, with the announcement in 2017 of a four-part comic series. With covers which, I must say, personally appealed (some more than others). I was looking forward to settling down with issue one, in the hope that the series would be brought to life in an interesting way in a format rarely used, bar Jack Kirby's unfinished version and the Motter/Asquith four-parter of the late 80s). What we got, though, was not really 'The Prisoner' at all, but a post-watershed BBC1 drama about a generic spy (not the McGoohan original). I'm undecided if this is a good move, or a bad one, and will reseve judgement. Also, I won't give spoilers here, but as you can guess the man is abducted to the Village. However it took the entirety of the comic to reach that point, meaning that a quarter of the finished 'story' would take place pre-Village, so although it was well written and exciting, it wasn't, so far anway, 'The Prisoner' at all..

However, I did find the storytelling gripping and interesting, and I'm looking forward to the future issues. But therein perhaps lies my only criticism; it's not The Prisoner, it's just a spy story, set in today's times, in which a man is kidknapped. It is, in essence, the version of 'The Prisoner' that George Markstein wanted, although lacking a little of the subtlety with which he approached his spy writing, rather than the unforgattable allegorical conundrum that McGoohan created. But that's not a bad thing necessarily.

Not being an aficionado of comics particularly (unlike my fellow reviewer Anthony, above, who knows his onions far more than I, or comic artis Lew Stringer, whose review can be found HERE) it's hard for me to judge the visual expertise. I certainly have no criticism of the artwork, with lots of arresting imagery on show. Although, it all lacked a bit of colour, but perhaps this will improve in the future issues, as we see more of the colour of the original series, and of the Portmeirion setting. 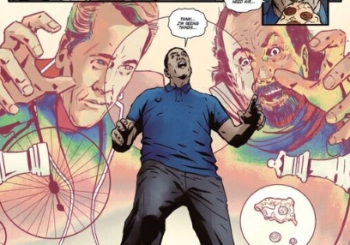 Not being an expert either on what normally happens with limited run comics, I'm not sure if 6 or 7 cover variants is the norm, but to a 'non comics observer' like myself it seems a little excessive, and effectively means the collector will have to pay in excess of £20-30 for essentially one issue, so there's a gripe that one could level there. 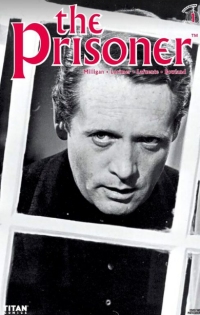 Overall, ask any fan of 'The Prisoner' what attracts them to it and they will be sure to answer ' the mystery and allegory, it asks more questions than it answers' and be sure to mention Patrick McGoohan. Ask McGoohan himself, or any cast of crew from the series, what it was all about and they will tell you that it transcended simple spy drama, and ask anyone who vaguely remembers 'The Prisoner' series but isn't a fan and they will answer 'it was a strange series, hard to work out what was going on'. It's therefore a shame that, so far at least, none of those elements, the key tenets of the series, are present in this comic version, but even so I am looking forward to issue 2.