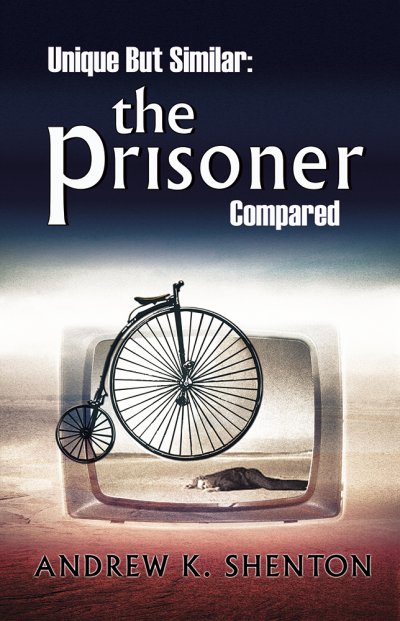 When The Unmutual Website was in its infancy, I decided to divide up the Article Archive into two sections. One would deal wirth general or episode-related articles ("The Observation Room"), the other specidfically dealing with films or TV shows which could be compared to "The Prisoner". This project ("The Projection Room") has been a success, and that is due in no small part to the articles of a Dr Andrew K Shenton, who provided a series of articles comparing The Prisoner with several TV science fiction series.

It was with mixed emotions then that in 2012 I received an email from Andrew asking for the articles to be removed from the site. Sadness that the site was for the moment no longer going to be hosting the articles, but excited with the news that the articles were going to form part of a larger collection called "Unique But Similar - The Prisoner Compared". (Please note that one of these articles, thanks to Indepenpress, can still be read - click HERE for the Projection Room).

Published by Indepenpress, "Unique But Similar" is a 182 page book, containing 10 chapters, comparing the Prisoner to 11 other TV series or episodes, including the 4 originally hosted at TUW. In addition to these chapters is an introductory essay discussing the background to the book, to the series itself, and also the research that Andrew has undertaken (which is more extensive than can be said for most "Prisoner" books, many of which Andrew refers to throughout, some good some bad). It is a fine start to the book, and I felt that already I wanted to read on.

What I particularly liked about Andrew's style is that he does not attempt to re-invent the wheel. He is aware that analysis of The Prisoner has been the subject of countless books and articles, to the extent that some might say it has reached saturation point and so does not attempt to analyse the series, its episodes, and the individual nuances within it, but, as the title suggests, merely compares it to other works without the book disappearing into a sea of "this is my theory on what The Prisoner is all about".

The chapters themselves are wonderful individual pieces of work, some (such as "The Omega Factor" and "Children of the Stones" comparisons) are predictable (although excellent) choices but others (such as "Cloud Burst") are not, and show that Andrew is a remarkably perceptive writer (unlike some other so-called Prisoner "experts" of recent years) and this comes accross within each chapter. In some cases I found myself wanting to view the comparators that I had never seen (such as "The House" episode of "Night Gallery") and also re-watching old favourites ("UFO") as a result of the aspects of these chapters. Even those predictable choices have never had this level of analysis it must be said, and as with his original 4 pieces of work I would be proud for TUW to host any of these pieces.

The only criticism with this book, is that if one hasn't seen the episode or series concerned (which in some cases is not easy givien the lack of any sort of commercial release of "Cloud Burst", for example, or in the case of the "Joe 90" episode would involve the purchase of an entire box set) then it's difficult to process the information in the chapter or reach a conclusion in agreement with or opposed to the view of the authors (which to some extent is one of the points of the book from a reader's perspective). But that's a very minor criticism and I would suggest that most fans of "The Prisoner" would be aware of a minimum of 3 or 4 of the episodes or series referred to in the book, and to my mind even only 3 chapters would represent good value for money. All 11 chapters combined are sheer indulgance for fans who like their articles to be more meaty than the fayre offered up by some other "Prisoner" books of recent times and it's a very fine addition to any sci-fi fan's bookshelf.

"Unique but Similar" therefore comes highly recommended from me and is more than worthy of it's very reasonable £8.99 price tag. There are no images within the book, but I'm not sure any are needed, and this will have certainly kept the costs down and it's nice to see that these savings have been passed down to the reader.

It is certainly unique, and certainly not similar, and in terms of analysis one of the finest pieces of work I have read, not just about "The Prisoner", but Telefantasy in general.

Additional review of this book from Roger Goodman of PrizBiz HERE.