Roger Goodman's review of Unique But Similar (The Unmutual review with purchasing information can be found HERE). 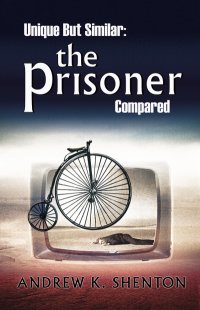 In the early days of Prisoner critiques, whether in the academic OECA booklets or the Jackdaw-style leaves of The Prisoner Appreciation ociety's
1970s journal Alert, the programme is compared with the works of John le Carré, Len Deighton, Franz Kafka and Lewis Carroll, to name but four.
`Unique But Similar - The Prisoner Compared' by Andrew K Shenton comes to the subject with the tv hindsight of 25 years and compares and contrasts The Prisoner with various fellow trig points of television, such as Children of The Stones and Blake's 7.

Included are obvious choices, such as Doctor Who and UFO, with its plethora of Prisoner personnel and themes, treachery, mystery, ambiguity, contradiction, frustration, pessimism - even the re-use of the Living In Harmony backlot reflects the same later episode budgetary constraints. Less unexpected tv references are examined, such as Look and Read and Yes, Prime Minister.

Whilst reading this book on holiday in Anglesey, I came across all the Robin of Sherwood paperbacks for 50p in a charity shop in Holyhead, so for Andrew Shenton to acquaint me with Richard Carpenter's early career with Look and Read's `Cloud Burst' was particularly welcome. The latter deals with "who can be trusted", a theme George Markstein, story editor of The Prisoner, saw as important to his brainchild. By comparing The Prisoner with other series that are more rooted in reality,
Shenton is able to remind us that questions like "Whose side are you on?" were uppermost in the early discussions of the series, areas of interest
that have receded with the (over?)development of allegorical interpretation and the dissipation of the Cold War.

Unlike some Prisoner commentators, Andrew Shenton is more than prepared to deal with the less pleasant aspects of Patrick McGoohan's character and this makes refreshing reading after some recent sycophancy. Each chapter has dozens of references and notes (Chapter Seven has over a hundred!), and there are some kind words about myself and Prizbiz. The references and notes give the book a tone of both respect and authority, as well as being a fine tribute to the author's research, whilst providing the reader with a constant stream of memory jerkers and an invaluable Prisoner printed Pinterest.

Unique, as the title suggests, and unhesitatingly recommended.