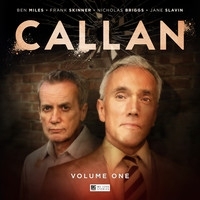 There are few television series which can rightfully be compared to The Prisoner series, but one is the sublime 1960s series Callan, which starred Edward Woodward as a government agent, dealing with the red files, a loner, fighting against the bureaucracy. The series had input from Prisoner co-creator and script editor George Markstein, and is now available on DVD.

Another thing the two series have in common is that Big Finish have now adapted both series for audio.

Peter Mitchell, son of original Callan creator and writer James Mitchell, has adapted four of his father's short stories, which appeared in the Daily Express back in the day, fleshing them out beyond their initial 1000 words into full cast dramas, lasting 50 minutes each. File on a Deadly Deadshot sees Callan and Lonely infiltrating a high-class shooting party, File on a Classy Club sees Callan become a casino loser, File on an Awesome Amateur sees him caught up in a KGB classic spy yarn, and File on a Harassed Hunter sees Callan accompanying Hunter to Newcastle for a secret job (did I hear a Peter Mitchell cameo here?)

One word to describe this set? Superb! Mitchell has got the pacing of his adaptations totally in tune with the original series, and the inclusion of the original Callan music, including commercial break bumpers, is a lovely touch. Mitchell has his father's gift of taking us into David Callan's bleak world and keeping us there, utterly absorbed and immersed, with File on a Deadly Deadshot and File on a Classy Club in particular great examples of how to craft a collection of characters which wouldn't have looked out of place engaging with Woodward, Radd, and co. on the small screen.

And that's why Big Finish, and in particular Peter Mitchell, deserve the highest possible plaudits for Callan. The episodes are just as good as most that you'd find in the original series. There's no re-imagining going on here, as with some of Big Finish's other ranges. These four episodes can be inserted into the original run, and referred to as canon, without question. They are, simply, Callan at its best.

The support cast, as one would expect with Big Finish, consist of very capable performers (and it was nice to hear another Prisoner connection with a few cameo roles by Big Finish's Number Six, Mark Elstob), but the highest possible praise must lie with Ben Miles, excellent and assured as Callan, and Nicholas Briggs, who is astonishingly good as Hunter.

I was initially worried by the announcement of comedian Frank Skinner in the role as Lonely, made famous by the great Russell Hunter in the original series. After all, Skinner's acting abilities have often been questioned in the past, and Hunter's performance so good that it could never be bettered. However, Skinner is a very good fit as Lonely, and I forgot after his first scene that it's he providing the voice, so believable is the writing from Mitchell. Although Skinner occasionally lapses into something of a cheesy performance, a sort of cross between Blakey from On the Buses and Dick Van Dyke in Mary Poppins, it's a respectful and moving performance, with some lovely dialogue between the characters, especially in File on a Classy Club.

My only criticisms, and they are minor ones, are that it's clear at times that older female characters are being played by younger actresses putting on 'old lady voices', which momentarily shatters the audio 'illusion', and there's a slightly jarring conversation about Lonely's abilities at the card game Brag in episode 2 (which would not be a problem had only moments earlier in episode 1 we hadn't heard Lonely beat a selection of unpleasant valets at, you guessed it, brag). But the fact that these are the only quibbles I can find is testament to the fact that this audio set is almost faultless, and is a sublime piece of work. More, please!

2018 is turning into something of a dynamite year for Big Finish; the surprisingly wonderful Jenny: The Doctor's Daughter, the heartfelt last episodes of Jago and Lightfoot, and now Callan. Callan is one of the best things that Big Finish have ever done.

Callan Volume 1 can be pre-ordered from Big Finish HERE.

Also available during this period of Callan renaissance is 'The Callan File', a 500+ page book on the original series by Robert Fairclough and Mike Kenwood, with foreword by Peter Mitchell. Click HERE to order. 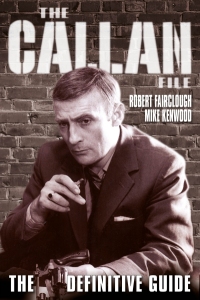